Built on the Love of God

Ignatius House was born from the generous gift of a family’s summer home and a desire to help future generations know God.

In 1957, Suzanne Spalding Schroder and her son John, a Jesuit priest, determined that the family’s 20 acres along the Chattahoochee River in north Atlanta would be ideal as a retreat center. They sold the property to the Jesuit Fathers and Brothers of the New Orleans Province of the Society of Jesus and plans began.

A 50-room retreat house was dedicated in December 1960 and Ignatius House opened for retreats in January 1961. The first retreat was offered for women only and widely attended by friends of the late Suzanne Spalding Schroder.

Ignatius House has continued uninterrupted for nearly 60 years, annually welcoming approximately 3,000 guests who seek to spiritual renewal to live out God’s will in their lives.

In 2005, the iconic, glass-walled St. Ignatius Chapel was added to the property by Alex & Betty Smith. Designed by Atlanta architect James Haverty Smith, the chapel builds upon Suzanne Spalding Schroder’s intent that future generations will know their God.

In 2009, Maria G. Cressler was named the first female executive director of Ignatius House. Under her leadership, outreach has grown to include diverse demographic groups, including interfaith programming. Now, she turns her focus to support for busy families in a hectic world.

In 2011, Ignatius House added the J. Robert Fitzgerald Resource Building (also designed by Haverty-Smith), named after the first professional who was not a Jesuit priest to lead Ignatius House. Known widely as “Bob,” he continues to participate in the work of Ignatius House as a spiritual director.

Throughout the years, generations of families have contributed to the property, including outdoor decks, trails and garden care, furnishings, art, and operational funds. If your family would like to contribute to this legacy, kindly visit the Donation page. 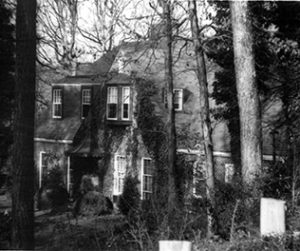 Suzanne Spalding Schroder donates her home — 20 acres in north Atlanta — to the Society of Jesus for creation of a retreat house. 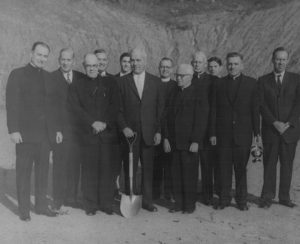 Bishop Hyland joins the Schroder family and the Jesuits to break ground on a 50-room retreat house.

The completed retreat house is formally dedicated with an outdoor Mass. 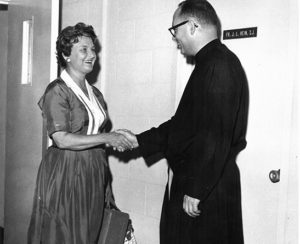 Ignatius House officially opens for its first retreat, consisting of 37 women and was dedicated to the memory of Suzanne Spalding Schroder.

Fr. John Lawrence (“Larry”) Hein, SJ, is named director and superior. During his tenure, he  established a Solidarity group for Christians and Jewish Atlantans, a Marriage Encounter program, and a 15-minute radio show on WGST.

Fr. Dan Partridge, SJ, becomes director of Ignatius House. He develops a “Blueprint for the Future” to expand nature trails, picnic areas, outdoor Stations of the Cross, and the goal of a new Chapel.

Fr. Kerry Clark, SJ, becomes director. He turns to a Catholic Singles Group (mostly from Christ the King parish) for help constructing paths, steps, and railings throughout the wooded areas.

Jan Chernowski, an architect, designs a four-story, 1200-square-foot deck overlooking the Chattahoochee River in memory of her husband John.

The small chapel is renovated, enlarged, and dedicated to the memory of Suzanne Spalding Schroder. 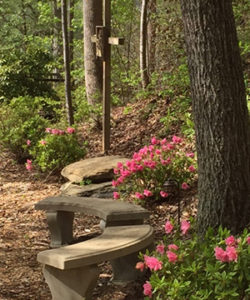 Dolly Tuttle’s “Campaign for Growth” beautifies 20 acres with donated trees and azaleas in memory of a loved one. Gifts include statuary of Mary and Christ, four personal decks, and more.

Fr. Wiltz forms an advisory board with Dennis Crean as the first chairman.

Robert J. “Bob” Fitzgerald becomes the first professional director of Ignatius House. He oversees a $1.5 M capital campaign to renovate the Schroder House, add a kitchen and dining room to the Retreat House, and deck. He formalizes a Board of Directors with David Fitzgerald at the first chairman.

A 150-foot cell tower, uniquely designed as an outdoor chapel, is dedicated by Archbishop Donoghue. The tower features 22 icons representing creation, Judaism and Christianity. The tile icons were designed by an artisan in Mexico — the neice of Fr. Jack Vessels.

Dennis and Marie Crean support a patio extension to create the “Garden of Living Water.” 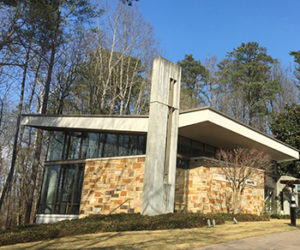 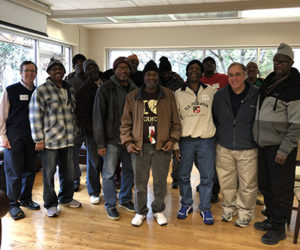 Ignatius House donors erect an administrative building with meeting space, designed by Jimmy Haverty Smith of Perkins+Will and built by Benning Construction Co. The building is dedicated as the J. Robert Fitzgerald Resource Building in honor of the first layman executive director at Ignatius House.

A national emergency, declared due to the novel COVID-19 global pandemic, causes Ignatius House to close for nearly three months. Donors generously offset the cost of closure, allowing Ignatius House to carefully adapt to new circumstances and re-open for modified retreats in June.