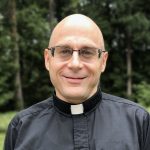 Rev. Bill Noe, SJ, the youngest of eight brothers, is a native of Racine, Wis. Before entering the Society of Jesus in 2003, Fr. Bill lived in the Washington D.C. metropolitan area for several years, where he worked as an electrical engineer. Fr. Bill has enjoyed long associations with St. Anselm’s Abbey, a Benedictine monastery, and Bethlehem House, a community formed for people with an intellectual disability – both in Washington D.C. During his formation as a Jesuit priest, Fr. Bill was trained in catechesis, comparative theology, and interreligious dialogue. Fr. Bill began his ministry of spiritual direction at St. Ignatius Retreat House in Manhasset, N.Y., in 2005 and has served as a spiritual director in New York, Chicago, Bolivia, and the United Kingdom. From 2015 to 2019, Fr. Bill served as director of Ignatian Spirituality at Loyola on the Potomac, a Jesuit retreat house in Faulkner, Md. He recently received an MA in Pastoral Mental Health Counseling from Fordham University. He is pursuing licensing as a professional counselor in the State of Georgia.